Having a Good Time in Hell

I had final exams this week.  With the same teacher.  How I ended up taking three classes with this man I can’t quite figure out.  Serendipity, I guess.  He was a doctor with a reputation, too.  Other students would hear his name and cringe–“Oh, you have Dr. Ferguson? Good luck…”  Aw, come on! How bad could he be? I had professors in undergrad who were notoriously terrible, and I came to really appreciate them.  I probably developed the most as a student from these infamously difficult professors.  I should have kept my philosophizing about growth and development to a minimum.  I should have prayed…or something because what I witnessed yesterday during the administration of our Surface Anatomy final exam I can’t say I’ve ever seen before.   It was like something from a movie or maybe the sitcom “Scrubs”.

I am taking parallel coursework in both Eastern and Western medical traditions.  This term I took exclusively Western medical courses excepting one Eastern medical class.  I took an exam on Wednesday and finished two exams yesterday–Anatomy and Physiology I and Surface Anatomy which is really more comparable to Gross Anatomy.   Anatomy and Physiology I was a typical class in that it was not very difficult in terms of expectations;  I had a sense of what was expected of me in terms of learning.  Surface Anatomy, on the other hand, was epic in that our teacher continually broke the rules of good pedagogy.  He rarely tested us on the material that we studied.  He tested us on obscurities.  Every exam was a trick, and he tricked us weekly.  This doctor-turned-professor adored the weekly exam.  I’ve never taken so many exams in a trimester–36 exams plus 3 midterms and 3 final exams! That’s a lot of “bend over and grab your ankles”.

So, yesterday during the final exam a few people…broke.  Upon receipt of the exam, one young woman in my Surface Anatomy class started openly weeping.  Another woman just walked out! Someone else threw a pencil.  The only guy in our class began grinding his back molars so loudly that I thought I heard a belt sander.

It didn’t feel real.  I kept thinking to myself, “Is Cathy really crying? Did Lee really throw her pencil? This is really happening.  Kat really just walked out.  Yeah…this is like one of my nightmares.  We might all fail.”

When we all finished, we met in the common area outside the classroom.  We all looked like we were going into a state of medical shock.  I kept wondering what Dr. Ferguson’s wife was like.  Did Dr. Ferguson have any insight into himself? He was a very nice guy, but his pedagogical talents were…lacking.  I imagined him in a very hyperbolic way as I waited for him to call us back into the room.

I observed us all as we attempted to self-soothe and self-regulate.  Twelve weeks ago, most of us didn’t know each other.  Now, we were bonding over the ordeal of taking one of the worst exams in the history of our academic careers–Surface Anatomy with Dr. Ferguson.  His reputation was well-deserved.  He had truly earned it.

Dr. Ferguson liked to grade exams directly after we turned them in.  We were about to get our grades for both the exams and the term.  David announced that he was going to have words with Dr. Ferguson.  He wasn’t as nice as the rest of us.  He threw his hacky sack against the wall and disappeared down the hallway.  I just stood against the wall and made snarky comments–my default social habit.

How did it turn out? Well, I don’t know how everyone did, but I don’t think anyone failed the course.  Dr. Ferguson joked about the class wanting to run him over in the parking lot.  No one laughed.  We all just stared at him pointedly when he said that.  It was very awkward for a few seconds.  I think he understood.

I don’t want to endure another Ferguson-style exam, but, alas, I will.  I have numerous other courses with him.  We all will.  He will, I think, go down in the history books as the worst exam writer in all my years of academia, and that’s saying something.  I’ve studied at three universities under a plethora of instructors–foreign and domestic.  He wins that award hands down.  The bright side? All of us in this cohort have become friends because of this ordeal.  Ordeal does that to a group of people.  You have experiences together, and then you have stories to share and tell.  No, it’s not in any way fun, but you bond.  This is why people stay in touch after college and graduate school.  Post-secondary education is often an ordeal for many people.  It’s hard.  We need help from other people to do well.

There’s that asking for help part.  You gotta do it! (Now I’m grinding my teeth.)

The Prince of Darkness might be one of my instructors, but I think we could learn to have a good time in hell if we’re there together…maybe.  It’s an idea worth considering. 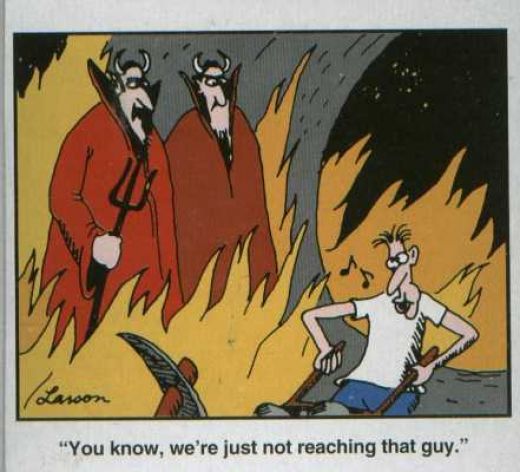 2 Comments on “Having a Good Time in Hell”