I think I’ve tried to write a blog post six or seven times in six or seven weeks and failed each time.  If you knew my writing process, then you would know that is not me.  I have never had a problem writing anything.  The words have always flowed with ease.  Since the beginning of January I have felt frozen inside not unlike my upper Midwest environs.  An emotional Polar Vortex has settled within me, and I feel locked up and iced in.

So, what gives? I ask myself.  It almost feels like mild depression.  I don’t want to shower.  I don’t want to leave the house.  I don’t want to eat anything unless it involves chips and hummus.  I only want to drink coffee.  These are my two “vices”.  And, I just want to sit on my couch under a blanket in comfy pants and watch crime procedurals.  I don’t even want to vacuum anything.  The climate of my mind has turned cold, damp, and grey.  But, why?

I think I can pinpoint the reason.  It’s my ex-husband, but I’ll name him The Straw.  He is akin to the straw breaking the metaphorical camel’s back.  When I take a breath and assess the situation, the word resiliency comes to mind.  I think you and I, my readers and me, we ought to have a discussion about resiliency in real time.  How it works and what it looks like because “resiliency” is all the rage these days.  In the simplest terms, resiliency is defined as the capacity to recover from difficulties quickly.  As I lay out my circumstances, think about your life in the context of resiliency.  Maybe we can make some connections together.

I entered a graduate medical program in January 2017 after ending my 20-year marriage in 2015.  My marriage wasn’t always abusive, but it was never fulfilling either.  Due to alcoholism and domestic violence likely fueled by addiction and personality problems, I had to leave the marriage for my health and safety.  Healing from domestic abuse is probably one of the hardest endeavors I’ve ever undertaken.  It has, for me, been far more grueling a process than healing from human trafficking (which I experienced in 1991).  Allow me to explain.

Generally speaking, one expects to be treated in a sub-human manner by a human trafficker.  It isn’t like human traffickers are upheld as paragons of virtue.  They’re criminals who commit heinous crimes.  When you’re abducted for the purpose of sexual slavery, you figure out very quickly what’s ahead of you.  The only surprise is the degree to which you will be degraded and abused.  When you are trafficked, you are designated a slave.  Slaves are no longer perceived to be people with rights or even identities.  Slaves are chattel.  For the most part, you know what to expect when you lose all humanity, and you know what to expect from your slave owner.  Expect nothing and everything at the same time–it will all be far beyond the worst you could imagine anyway.  But, you never expect your life partner to treat you as you were when you were trafficked.

And this is key–domestic violence and abuse are dehumanizing because it is another sort of objectification.  The victim becomes an object of rage and violence  In my experience, this is the parallel–the objectification.  What made it harder to overcome was how it crept up on me.  I never expected to feel so utterly un-human as I did at the end of my marriage.  My mind could not accept what was happening to me in the midst of the violence, and I continued to believe that it wasn’t true in part because my abuser denied it and still denies it.  It was and is functional denial.

Even though you are called Wife and Partner you are treated as Other.  The descent into abuse feels like a surreality of your own making because the entire time he hurts you he tells you that it isn’t real.  It isn’t happening, and he never did that.  You feel as if you are going mad or perhaps you provoked him.  Maybe you wanted it.  Maybe you imagined it.  Maybe you deserved that which he said never happened.  Perhaps it was all your fault even though it never happened.  You question everything and believe nothing.  You begin to gaslight yourself in the context of his gaslighting.

Until you hear tendons snap.  And see your blood.  Until you have surgery.  Twice.

Physical healing comes far sooner than any emotional, psychological, or spiritual healing does, but I don’t like to put my life on hold because some part of me is lagging behind.  We must keep going.  Catch a vision.  Keep trying.  There will never be a convenient time to try something new or even build something.  Risk is never convenient.  So, I forged ahead with graduate school never expecting to be sexually harassed within three months of beginning my program.  The sexual harassment was consistent and prolonged, and I was eventually granted a restraining order by a county judge.  The entire affair was escalated to the Department of Education’s Office of Civil Rights who, after an investigation into my college, found them guilty of discrimination based on sex.  All in all, the harassment and subsequent investigations lasted almost two years.  So, I dealt with one circumstance of sexual violence in the context of another.  Simultaneously.

One would think that I felt empowered, but I didn’t.  I felt victimized all over again.  Sure, I stood up for myself and other people.  The perpetrator is no longer with the school, and the school was found guilty of discrimination.  They are now going to experience two years of remediation and governmental oversight.  As discreet as I was during the entire process, I was alienated by other students in my cohort who knew about the situation;  and I was even shunned by people who had called me ‘friend’–simply because I advocated for myself and others.  I became something of a pariah.  It felt like blame.  Should I have just taken it? Should I have said nothing even though the man who was harassing me had harassed other women, too? That would have been wrong.  Alas, there are people who seem to think that we should just turn our heads and let people victimize others.  Don’t make waves.  Mind your own business.  I can’t do that.  To me, that’s immoral.  I am, however, very familiar with victim blaming.  Friends and family blamed me for the domestic abuse in my marriage, too.  It’s a common phenomenon.

I was actually feeling somewhat relieved after everything with my former college came to a close, but that changed when my ex-husband asked to meet with me a few days into my winter break.  He has been making unexpected demands that have violated prior agreements, and this has been my undoing.  It isn’t the demands that are the most stressful or triggering.  It is his undying belief that he is a victim of our divorce proceedings.  He believes that he is a “good guy” and that nothing wrong ever happened.  To him, he is the Do-Gooder.  The Innocent.  Consequently, when I meet with him, I interface with this persona who is utterly convinced of his personal awesomeness, and, all the while, I am sitting across from someone I once trusted implicitly who became my perpetrator.

So, what does all this have to do with my current lability and affect, and what does this have to do with you? I like to say that our resiliency falls on a spectrum.  Bring to mind an emergency room nurse or doctor.  How many times can a clinician declare someone dead after trying to save them and walk away unscathed? Ten times? Fifty times? At what point will it finally register on a deep level? When will it break you? When will an emergency responder finally see one too many horrific car accidents with fatalities? When will a social worker hear one too many horrible accounts of abuse? When will a guardian ad litem witness one too many child abuse cases? That moment of “one too many” is the moment that you’ve hit the end of your resiliency spectrum.  You’re done.  You’ve got nothing left.  You can’t cope anymore.  You can no longer resist the pull of the dark gravity of hopelessness and despair.  You are desolate.

Everyone has a resiliency spectrum (RS), and I suspect that each RS is uniquely our own developed over time and tailored to our life experiences.  What requires me to be resilient will be different from what requires you to be resilient simply because your experience of trauma will differ from mine.  The point is that we can develop resiliency with practice, but there also comes a breaking point.  Even the most flexible of trees eventually breaks or uproots when a hurricane blows through the forest. 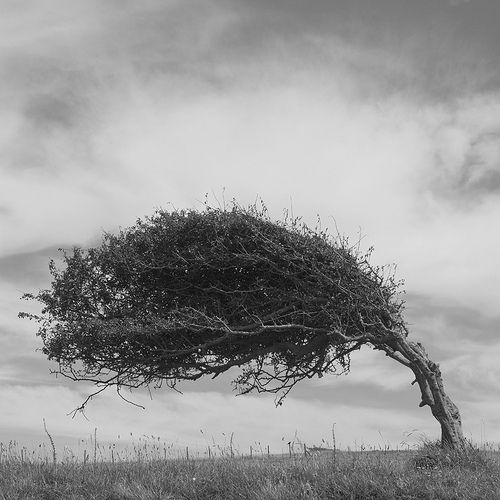 I don’t know about you, but when I feel bent over, desolate, and overwhelmed, my mind is immediately overcome with thoughts that are shame-based.  I feel accused and afraid.  Suddenly, I feel inadequate and terribly alone, and my knee-jerk reaction to these feelings is to become excessively self-reliant and withdrawn.  I have a strange fear of being “discovered”.  All of this is rooted in my experiences with my family of origin.  My mother declared with great pride that she needed no one and could do everything by herself even though everything she did was motivated by a profound fear of abandonment.  Alas, to need anything or anyone–to her–was an abomination.  It was a weakness that she would punish with great severity if she spotted it, even in me.  It is ironic to me then that the first step to restoring your resiliency is to reach out and restore connection.

Connection through vulnerability eradicates shame.  Shame cannot exist in the presence of true connection and vulnerability, and we are able to begin to restore ourselves when we connect to other people who support, validate, and believe us.  For many of us who have experienced trauma, reaching out while feeling vulnerable inside ourselves feels like the hardest thing to do particularly if you experienced trauma within close relationships.  I suspect the reason for this is because you’ve experienced violations of trust from people with whom you allowed yourself to be vulnerable, and your brain isn’t going to let your forget that.  I can attest to this experience.  After experiencing sexual violence in a marital context, I find it extraordinarily difficult to be vulnerable with anyone now.  I still try, but it is much harder.  There is a great confusion that wants to settle in.  Feelings of trust can become confused with feelings of suspicion.  After all, the people I once trusted are the people who hurt me the most.  It’s interesting, isn’t it? That statement alone can fuel self-imposed isolation and fear of intimacy and vulnerability, but, in reality, your brain is trying really hard to keep you safe.

So, what is to be done then? I’ve got three suggestions.

Together, we will keep going even when it feels like we can’t.